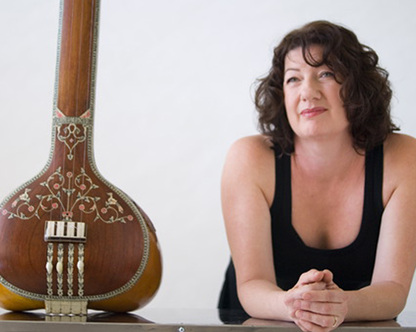 Ann Dyer has explored sound and music for over thirty years as a concert/recording artist, student of Indian music, and teacher of yogic sound. Her early career as a progressive jazz artist took her across the U.S., India, Brazil, Mexico, and Canada and produced three critically-acclaimed CDs, including Revoler: A New Spin which received recognition as one of the Top Ten Recordings of the year by the Village Voice.  She is Director of the Vak Choir of "Everyday Voices" which premiered fall 2013 in the multi-disciplinary, original work, "Vak: Song of Becoming," commissioned by the Yerba Buena Center for the Arts of San Francisco. Subsequently Dyer was commissioned by the San Francisco Asian Art Museum to create "Sounding Transformation," performed by Vak Choir in conjunction with Smithsonian touring exhibition "Yoga: the Art of Transformation."  Dyer's teaching of the yoga of sound draws on Vedic mantra, tanrtric mantra, bhakti yoga, naada yoga, sanskrit and classical Indian music to support philosophical understanding, skillful practice and direct experience of the power of sound to postively affect our lives.  Ann is director of Mountain Yoga in Oakland, CA and is on the faculty of several teacher training programs. Her conviction that we are all born to sing is captured in her TedXTalk "Why Sing?, Why Now?".